Last Sunday, I drew an Affirmators! card from the deck that John sent me. Affirmators! are cards that state a positive affirmation. Stealing John’s idea, I am drawing one per week and then taping it to my bathroom mirror so that I see it frequently (and read it out loud).

Last week’s affirmator was about going with the flow and accepting changes in life–life will have ups and downs and we can learn to handle them instead of letting it throw us off the rails.

I found that card to be very timely because I had to make a big change in my walking routine. I developed a bad blister that went deep and I finally got to the point where I couldn’t walk on it anymore. Instead of letting that change completely derail me, I simply switched to riding my bike for five miles instead of walking.

I learned that changes can be good things! The first thing I noticed (other than not having the blisters continuing to pile on top of each other) was that my chronic pain got about 50% better right away. I used to walk around like an old lady, super stiff and in a lot of pain. After a day of not walking my five miles, my body felt better. I’d assumed that because I wasn’t doing strenuous exercise, it was okay to do a streak without stopping. Clearly, my body wanted a break.

When I started riding my bike instead of walking, I instantly felt the difference in my pain levels. I didn’t gasp or moan when standing up. I’d gotten so used to doing that, I thought it was just a typical part of chronic pain. I still feel pain but not as bad as it was when I was walking every day (it was my hips, hamstrings, knees, and ankles). So, I think that the change has been a good thing! I’ve been riding my bike instead and I feel good about it.

My blister is still healing. When the scab comes off (on its own–I don’t pick at scabs) I’ll start to walk/run on it again.

Today, I drew a new Affirmators! card, and was surprised to see that it’s something I’ve already been practicing for the last four years now–ever since my bipolar diagnosis and meds. 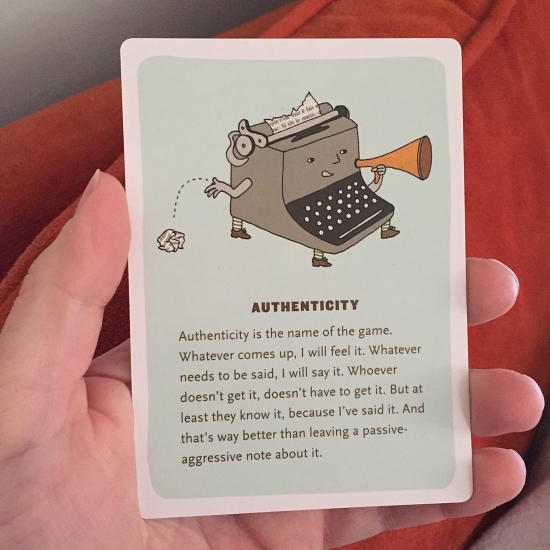 My entire life, I was a people-pleaser. I didn’t voice my opinions much because I didn’t want to argue about something. I just let people talk and I listened. I was used to being “talked over” or interrupted in groups of people, so I stayed quiet.

In 2017, when I started taking my bipolar meds, that all changed. I suddenly didn’t care what people thought of me for voicing my opinion. When I didn’t want to do something, instead of making excuses for why I couldn’t, I simply said no, it wasn’t really something I was interested in. I quit feeling intimidated and feeling pushed into doing things that didn’t interest me.

I finally felt authentic. And it was so freeing!

A funny example of this is when Renee and I were at baseball practice for the kids, we were facing each other and talking, and I noticed she kept looking at the left side of my face, near my ear. It’s something she had been doing for YEARS–ever since we met in 2009 ish. I always wondered what she was looking at, but I didn’t want to say anything that might embarrass her.

Well, I finally just straight up asked her. I explained that I’m not feeling inhibited anymore about things that I say, and I have been wondering for years why she glances at the side of my face while we’re talking. (I said this while laughing and covering the side of my face–I wasn’t confronting her in a bad way). She said she had no idea she was even doing it. We both laughed about it, but I was glad I finally just said what was on my mind.

Something else that was HUGE for me during this time was that I told the truth about everything–if I was feeling too much anxiety to go to a party, I told the host the reason that I wouldn’t make it (instead of coming up with an excuse). And they were so gracious! It’s amazing how understanding people are when you are honest with them like this.

My family (parents and siblings, not Jerry and the kids) thought I was always trying to avoid spending time with them, but I wasn’t. My family enjoys all the things that I don’t: the outdoors, beaches, tropical vacations, going out on the boat, having large social get-togethers, etc. I am the complete opposite: I am a homebody, and my idea of vacation is exploring a new city without an agenda and without doing the touristy stuff. I prefer small gatherings of people–maybe 1-2 couples over for Euchre or a bonfire.

Prior to my bipolar treatment, I would always feel like something was wrong with me (the “black sheep” of the family). Once I started being myself and stopped trying to please everyone else, I realized I actually liked being the black sheep 😉  I could try to fit in and be unhappy, or I could just do my own thing and be happy. (I also learned that many of the people that I thought were authentic and happy were actually just people-pleasers as well).

I became a much happier person once I started being my authentic self. I don’t make apologies for who I am/what I like. I just tell the truth, and hope that they see it’s not personal. This was hard for my family at first, because they were used to my agreeing to everything. But I don’t feel bad expressing my opinions anymore.

I think I’m pretty good at understanding the wisdom of this authenticity card because I do practice it all the time already. There are still areas I could work on, though. Here on my blog, I avoid several hot topics because they are just inviting arguments (politics, religion, and the best way to lose weight–haha!).

I like to keep my blog light-hearted for the most part. In that sense, I’m still being authentic–I’m just not sharing all of my beliefs about all of the topics. I save that stuff for close friends who I can joke around with and who know when I’m being serious and when I’m joking around. I love healthy conversations with differing opinions, but as you probably know from reading comments on Facebook or other social media, people like to get into heated arguments over a difference of opinion–and that doesn’t do anybody any good.

The more comfortable I get with being my authentic self, the happier I am. It’s hard sometimes, because my opinion might not be the popular one, but I remain true to myself. It’s worth it to find that happiness!

I have to say, though, I do kind of love passive aggression! It has its own kind of humor 😉

Arkansas GOP governor says he wont back a Trump 2024 bid

Your Leadership Playbook for 2021

Elizabeth Day returns with a show for friends in need