Updated at 5:05 p.m. with response from Cruz and Hawley.

WASHINGTON — In extraordinarily sharp remarks Friday, President-elect Joe Biden compared Sen. Ted Cruz to Hitler’s propaganda master in the way he peddled Donald Trump’s “big lie” about election fraud, though Biden stopped short of blaming Cruz for the riot by a pro-Trump mob at the Capitol as many Texas Democrats have done.

The Texas Republican led an attempt in the Senate to block congressional certification of Biden’s victory in the Electoral College, insisting that widespread doubts about the legitimacy of the election demanded an emergency investigation to allay public concerns. Wednesday’s riot, which left one Capitol Police officer and four other people dead, delayed the formal count of the electoral votes.

Biden invoked Joseph Goebbels, the Nazi propagandist, recalling his exaggeration of civilian deaths in the firebombing of Dresden, repeated by newspapers around the world. Goebbels maintained that the bigger the lie, and the more it was repeated, the more likely that it would be believed.

Biden noted that Cruz, like Trump, had spent weeks questioning the legality and accuracy of balloting in a half dozen states, despite an utter lack of evidence.

Asked if Cruz or Sen. Josh Hawley of Missouri, who also led objections that delayed the vote certification, should resign, Biden said: “They should be just flat beaten the next time they run.”

“The American public has a real good, clear look at who they are,” he told reporters in Wilmington, Del. “They’re part of the big lie. The big lie.”

“At a time of deep national division, President-elect Biden’s choice to call his political opponents literal Nazis does nothing to bring us together or promote healing,” he wrote. “This kind of vicious partisan rhetoric only tears our country apart.”

Really sad. At a time of deep national division, President-elect Biden’s choice to call his political opponents literal Nazis does nothing to bring us together or promote healing.

This kind of vicious partisan rhetoric only tears our country apart. https://t.co/YMMepv1OhV

“This is undignified, immature, and intemperate behavior from the President-elect,” he wrote. “It is utterly shameful. He should act like a dignified adult and retract these sick comments.” 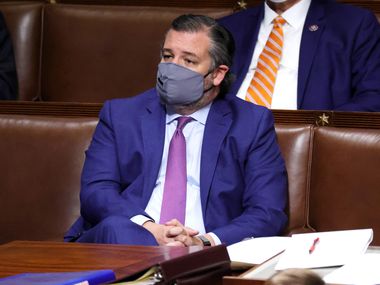 Biden did not mention Adolf Hitler, whom Goebbels served, or compare Trump to the Nazi leader.

“I was pleased to hear some of the more prominent Republicans say to me that the Ted Cruzes of the world are as responsible in terms of people believing the lies, as — not as responsible but similarly responsible — Trump,” the president-elect said. “But they didn’t say go to the Capitol, I’ll be with you, follow [as Trump did]. That’s a different story.”

Conservative commentator George Will, among others, accused Cruz of sedition and said he would bear a “scarlet S” the rest of his public career.

Leading Texas Democrats such as Julián Castro and his brother Rep. Joaquin Castro of San Antonio demanded that Cruz resign, as did Rep. Alexandria Ocasio-Cortez of New York. Cruz chalked up such talk to political opportunism by adversaries, making clear he would not follow their advice.

“It is your self-serving attempt at sedition that has helped to inspire these terrorists and their attempted coup,” alleged Beto O’Rourke, the El Paso Democrat who came close to ousting Cruz in 2018.

Cruz denounced the attack at the Capitol in real time as a “despicable act of terrorism,” and has repeatedly called for prosecution of those involved.

He has defended his demand for an inquiry into alleged irregularities in the election, saying Thursday that even in hindsight — knowing about the riot — he would have pursued a delay and objected to Congress’ affirmation of Biden’s victory. Doing otherwise, he said, would amount to shirking his duty, and he expressed disappointment that his argument did not gain enough traction among colleagues.

“Yes. Absolutely,” he told KXAS-TV (NBC5). “I would object and urge that we should follow the law and follow the Constitution.”

At the same time, with Trump’s presidency ending, his power waning and calls for his impeachment or removal through a 25th Amendment process by which the vice president and Cabinet could declare him unfit, Cruz has begun distancing himself from Trump in a way he avoided doing for over four years.

“I do think the president’s rhetoric and his language has been over the line,” Cruz said. “I think it was irresponsible. I think it was reckless. … He plainly bears some responsibility.”

If You’re Having Mental Health Struggles, You’re Not The Problem

Readers reply: why am I always tired on the sofa, but wide awake once I go to bed?