The Apple Watch might bill itself as a fitness-focused smartwatch, but none of my extremely fit friends wear one. That’s because we prefer Garmin’s lineup of rugged, big-button smartwatches with sunlight-readable displays. While Apple dominates the casual fitness smartwatch market, Garmin is the go-to brand for hardcore athletes that want to look like hardcore athletes.

Although I’ve longed for the silky-smooth UI that Apple Watch users enjoy, I never once pined over that OLED touchscreen. It’ll suck too much power, wash out in direct sunlight, and there are just too many scenarios where a capacitive touch panel would be defeated by gloves, water, or an errant touch. Real athletes want low-power displays and buttons to grab, damnit!

At least that was my religion before testing Garmin’s new Epix 2. 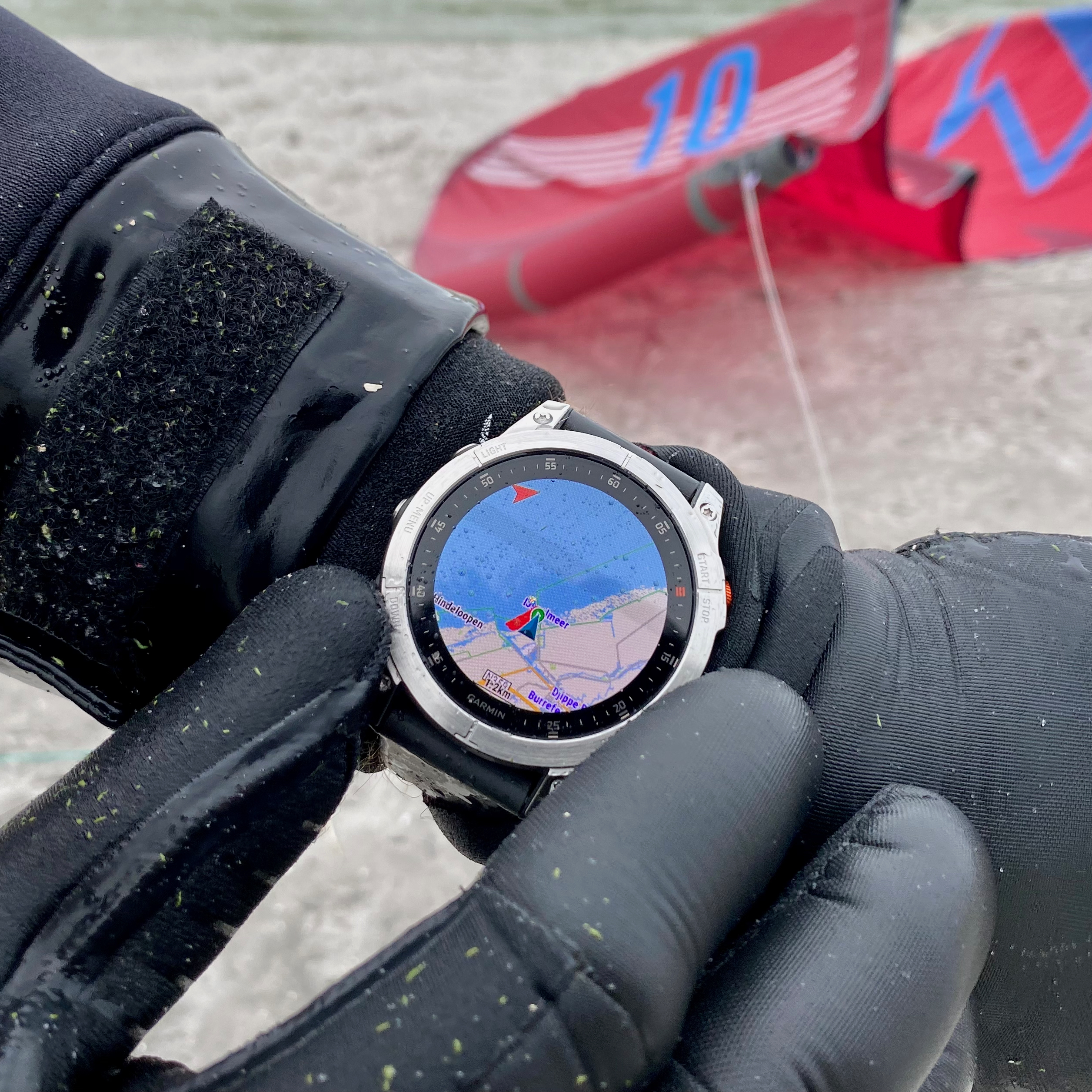 Garmin’s multisport watches are a hit with outdoor athletes for good reason. They’re highly visible in direct sunlight, go several days — even weeks — without charging, and can capture whatever running, cycling, climbing, golfing, snow, water, or gym / fitness activity you throw at them in excruciating detail. They also function as serviceable smartwatches with Garmin Pay, the Garmin Connect IQ app store, smart notifications, on-board maps, and enough local storage to sync playlists with music services like Spotify. I’ve been wearing a top-end Fenix 6X Pro Solar with a low-power transflective display since the pandemic began. It’s been a fun diversion and, surprisingly, a strong motivator to try new activities in order to test the device’s limits, and my own.

The Fenix 6 series used to stand alone at the top of the Garmin watch food chain until the recent launch of two new flagships: the Fenix 7 series and the Epix 2.

My colleague Victoria Song reviewed the Fenix 7S in parallel to my review of the Epix 2. We did this to give you a sense of how Garmin’s notoriously oversized multisport watches appeal to people with different wrist sizes and expectations. Me, a six-foot outdoor adrenaline junkie and long-time Fenix wearer. Her, a smaller-sized city human and wearables expert training for her first half marathon.

I’ve been testing the Epix 2 for the better part of a month, wearing it 24 / 7 as a smartwatch, sleep tracker, and health monitor (continuous heart rate, respiration, blood oxygen, etc.), while also spending at least an hour each day tracking outdoor activities with GPS like kitesurfing, road and trail running, mountain biking, and hiking; as well as a mix of indoor activities like jumping rope, HIIT, yoga, meditation, and weight training. 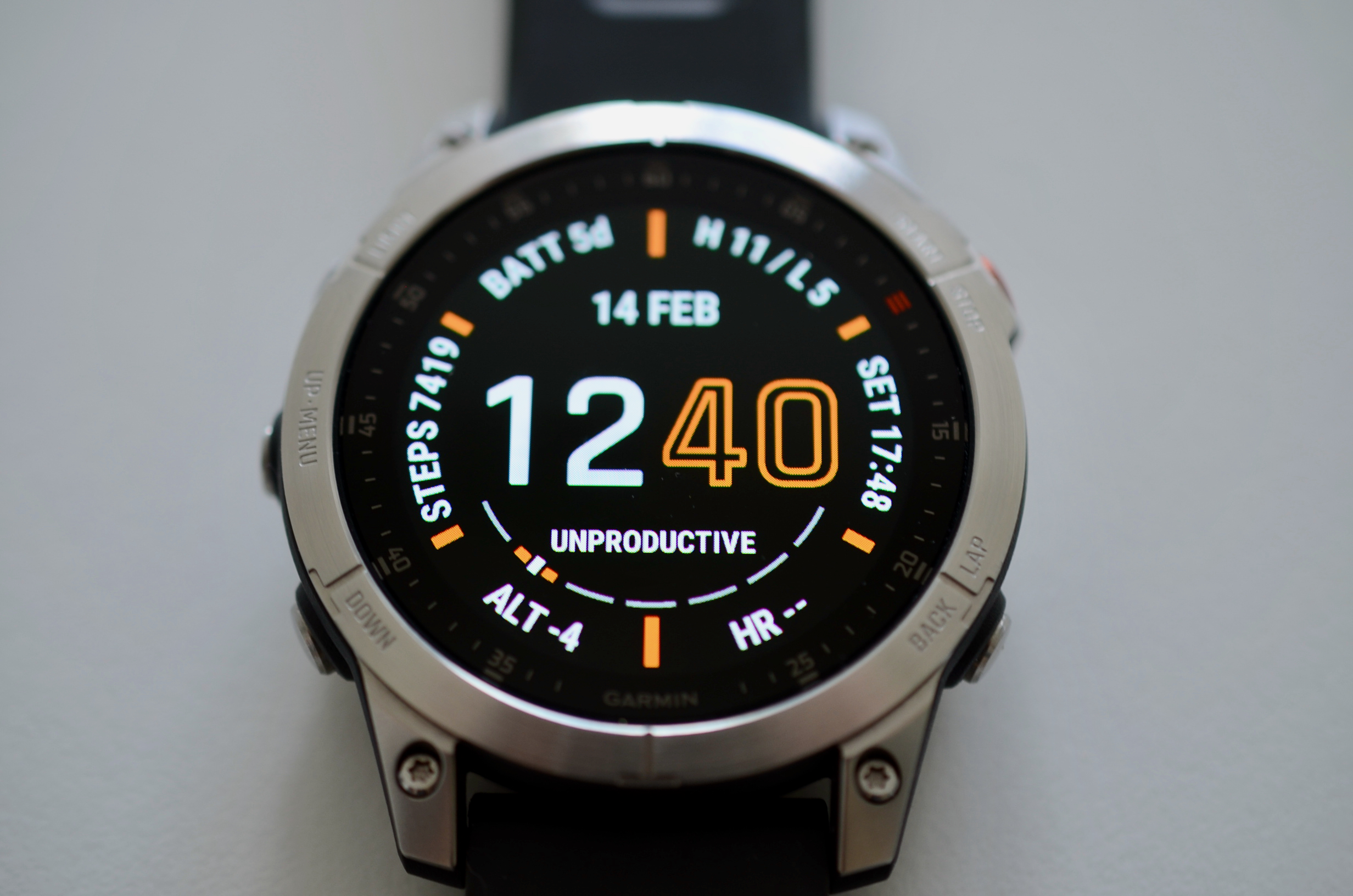 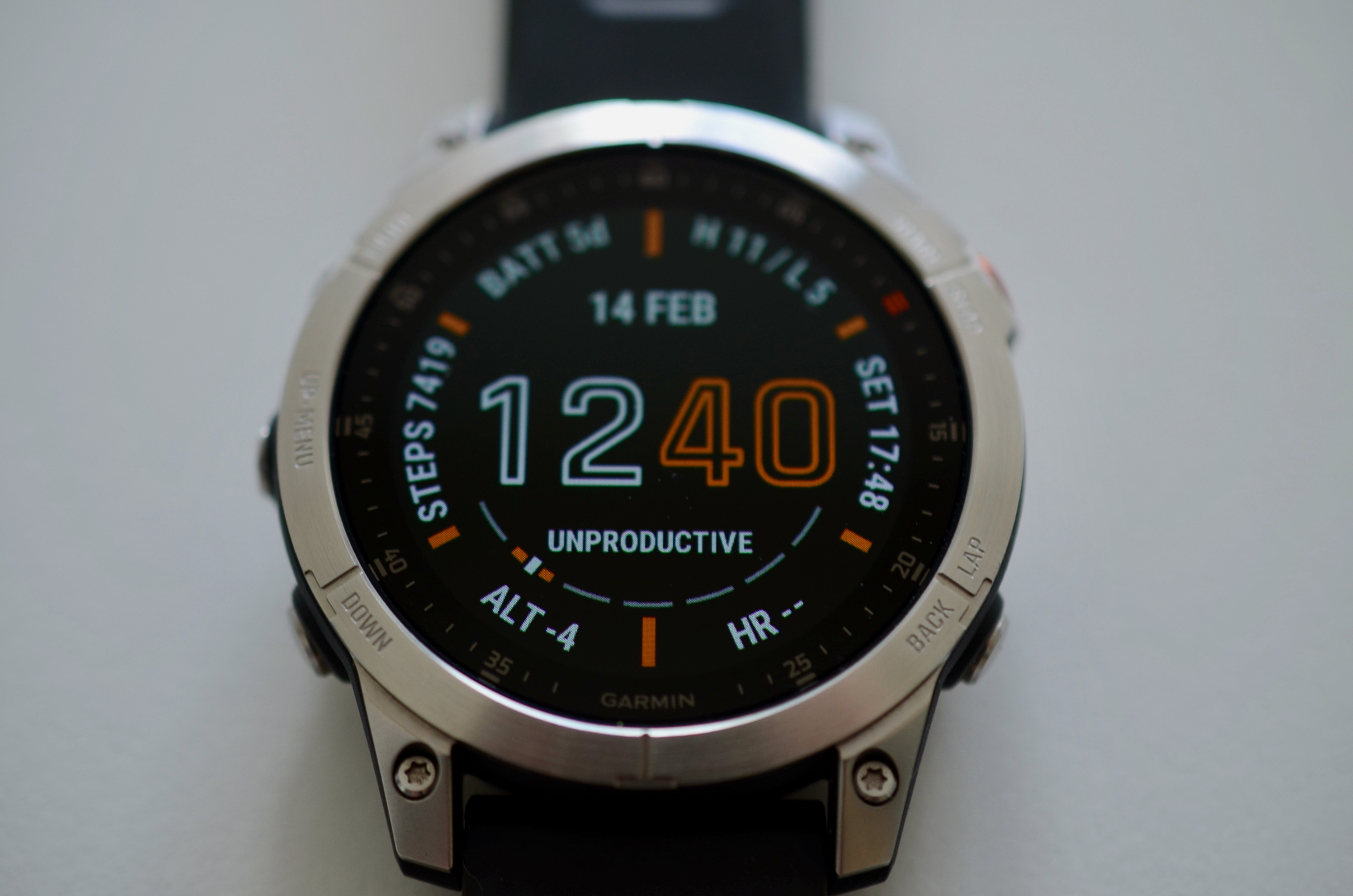 Always-on mode dims the watch face until tilting it.

Like other smartwatches, the Epix 2 has an option for an always-on display to tell you the time and other data without moving your wrist. When enabled, the display still dims after a user-defined timeout (mine is 5 seconds). When disabled, it goes completely black until a wrist gesture enables it. For my testing, I had the OLED set to medium brightness, which jumped to high brightness during activities. I also configured sleep mode to display to level one (of four) brightness at night to avoid being woken up.

With the OLED in always-on mode, the Epix 2 lasted over six days. It lasted nine full days with the display set to only turn on when my wrist turned. As a baseline comparison, my Garmin Fenix 6 with a low-power transflective display fitted with a small solar ring usually lasts about ten days in a similar configuration and activity level before needing a recharge. Victoria got almost two weeks per charge from her Fenix 7S Sapphire Solar during her training.

To say I’m impressed by the battery life of the Epix 2 would be an understatement. Six-plus days before needing a recharge is acceptable for all but the most extreme 100-mile ultramarathoners.

Fortunately, Garmin gave the Epix 2 the same five-button control found on the Fenix series in addition to that touchscreen. While the touchscreen is on during normal smartwatch usage, it turns off by default for the dozens upon dozens of included activity and sport profiles to avoid errant touches screwing up your data collection. That’s fine because the touchscreen can be enabled by default for particular activities, or whenever you want. Garmin gives the athlete full control over when the touchscreen is active.

For example, I have the touchscreen enabled by default when trail running and mountain biking because I like to get lost in the woods, and I rely upon Garmin’s onboard maps to get me back to my starting position. But it’s winter on the North Sea where I kitesurf, which means thick neoprene gloves are a must. For that reason, I just leave the touchscreen turned off in the kiteboard activity profile. Nevertheless, when it’s on, that wet touchscreen works perfectly against a bare finger.

I have had issues with the touchscreen being activated by my high-tech Nike jacket when running in moderate to heavy rain. The wet sleeve bouncing across the display can cause the activity view to switch. It’s annoying, but also rare, and doesn’t create a situation where my data could be lost.

The touchscreen makes navigating Garmin’s collection of global golf courses and topographical, road, trail, and ski resort maps so much easier. Without it, you’re required to master a tricky combination of buttons to pan and zoom around. With touch, you simply double-tap to zoom in or touch-and-drag to pan (you can’t pinch to zoom though and a button press is required to zoom out). The Epix 2 also refreshes map views quickly, which were frustratingly slow on the old Fenix 6. I use Garmin’s map views far more frequently now as a result.

Perhaps my favorite feature of the touchscreen is being able to tap and hold on the watch face to go directly into the selected complication. (Tap and hold is slower to execute than Apple’s direct tap interface, but it also requires deliberate touches to activate.) For example, when I tap and hold the day’s high/low temperature complication, I feel a light haptic bump before being taken into a detailed weather forecast. Tap “unproductive” and Garmin will explain how WAKING UP AT 530AM TO RUN A PERSONAL BEST 5K IN THE FREEZING RAIN BEFORE MY KIDS WAKE UP AND I HAVE TO BE AT WORK IS SOMEHOW UNPRODUCTIVE. Eh hem. My current watch face, which is a customized version of the Epix 2 default, has seven such complications on it.

The touchscreen improves the Garmin experience in many other ways as well:

The OLED display on the Epix 2 is also far brighter than the transflective displays used by Garmin’s Fenix series of watches. My bad eyesight has only gotten worse with the onset of age and presbyopia, making the high contrast Epix 2 display far more readable indoors than my Fenix 6 (and the Fenix 7 which features the same transflective display tech). But that OLED is also great in direct sunlight, with visibility on par with my Fenix 6 — something I didn’t expect.

The Epix 2 OLED also shows more detail than Garmin’s transflective displays. The 1.3-inch diameter OLED display on the 47mm Epix 2 packs in 416 x 416 pixels (326ppi) and 65k colors, offering far more information than the top-end 51mm Fenix 7X model which maxes out at 280 x 280 pixels (200ppi) and 64 colors (yes, 64, not 64k) despite offering a slightly larger 1.4-inch diameter display. What that means in practice is the Epix 2 can show more nearby trails, ski runs, or labeled points-of-interest, or use all those colors to better express data in graphs and charts.

Garmin omits one seemingly obvious feature from the Epix 2 and Fenix lineups: cellular connectivity. It’s a bizarre omission in a flagship watch worn by obsessive athletes who often find themselves training in remote locations as they push themselves to the extremes of their fitness capabilities. It’s especially peculiar given that Garmin already offers an LTE plan on its Forerunner 945, for example. It lets friends and family see your exact location (without a phone companion) and will alert Garmin’s emergency response coordination center in the event of a life-threatening situation. I don’t get it.

As an avid kitesurfer and trail runner, I don’t want to carry both a heavy phone and a heavy watch when I’m out to sea or atop a mountain. But Epix and Fenix give you no choice if you want the option to send a distress signal after getting yourself in trouble, as I did last year when I fell and broke my shoulder in the middle of a forest.

The OLED display on the Epix 2 is detailed and bright in all lighting, the battery can easily last almost a week or longer when training every day, and that touchscreen makes Garmin’s overwrought menu system and on-board maps so much easier to navigate.

Now that Garmin makes two flagship watches, the $899.99 Epix 2 is my clear preference, and the Epix 2 Sapphire (lighter, more memory, multi-band GPS, and tougher lens and case for just $100 more) is my recommendation to most multisport athletes looking for a do it all outdoor smartwatch, who are also ok wearing a bulky 47mm case.

Otherwise, the 41mm Fenix 7S ($699.99) is better suited for smaller wrists like Victoria’s, while the more expensive solar models with cases as large as 51mm are for those passionate athletes who participate in activities measured in days.

As Garmin’s best, the Epix 2 is also the watch Apple will likely be targeting with its rugged sport watch rumored for sometime later this year, presumably with on-board cellular unlike Garmin’s newest flagships. It’s a matchup that should push the whole category forward.

All photography by Thomas Ricker / The Verge unless otherwise noted.

Kansas rids itself of another boil on its ass, this time in the shape of Jeff Long

15 Songs We Almost Missed This Year