Google is making changes to its parental control system, Family Link, that aims to better reflect parents’ changing views on children’s screen time. In the pre-pandemic world, parents were more likely to see screen time as something in need of restriction — they’d rather their kids get offline or go outside to play with friends, perhaps. But the challenges of a locked-down world and the push towards virtual learning have impacted parents’ views. Google says today’s parents are more concerned about how kids are spending time on their devices, not how much time is being spent.

It’s a concession to a world where devices have become a savior of sorts to families who’ve stayed at home to avoid Covid — where they’ve been restricted from seeing extended family and friends, and where schools are closed and playdates and parties were cancelled. Parents came to realize that screen time in and of itself isn’t necessarily something to be avoided; they just wanted more control over how it’s used.

With the Family Link update, parents can now choose to make remote learning apps “always allowed,” so they don’t count toward overall screen time daily limits. This could include not only those apps that are used to attend school or communicate with teachers, but others that have popped up to help kids learn and be entertained, like the supplemental resources the school suggests — or the apps parents allow during break times from virtual class.

Parents will also now have access to more detailed daily, weekly and monthly activity reports that provide both an overview of how the child is spending their time in apps, as well as how screen time usage has changed over a week or month, and what portion of time was spent in the “always allowed” apps. This gives parents a better idea of what screen time was used for education versus play.

On Android, Family Link users will also be able to browse through a selection of teacher-recommended apps from the Google Play catalog for kids under 13 in the U.S. And parents can also now set screen time limits directly from the child’s device on Android. 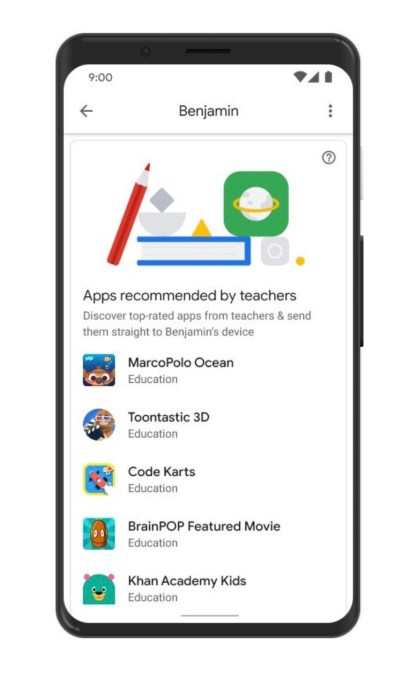 Though these updates will remain useful in a post-pandemic world where parents hold a more nuanced view of screen time, it’s unfortunate that Google waited until so late in the pandemic to roll these changes out. As more people in the U.S. are being vaccinated, restrictions are lifting — including the re-opening of schools in many places. That means parents’ stress over kids’ increased screen time usage will soon become a moot point. The devices will be replaced with in-person learning, and screen time may become villainized yet again.

Related to today’s news, Google has launched a new website for families whose kids are beginning to use technology at families.google. The company also launched a new content series with meditation app Headspace that will help families with kids practice mindfulness together. Again, that’s a resource that was desperately needed in 2020 during the pandemic’s heights, more so than it is today as the world begins reopening.

Still, the pandemic has forced families to think more about screen time and what sort of on-device experiences they want their children to have. As a result of this increased scrutiny, social apps like TikTok and Instagram — the latter just today, in fact — have rolled out more family-friendly safety features, aimed at encouraging parents to see their apps in a better light, rather than being the first to go when screen time gets locked down. It has also encouraged new hybrid learning and education startups to launch, hoping to build out a new category of edutainment apps that can avoid screen time lockdowns.

It’s worth noting, too, that the update to Family Link follows the addition of an App Store privacy label on iOS, which confirms the data Google collects on users. The app, until recently, had been one of the many Google iOS apps that had seen updates stalled due to the lack of labeling.

This Googler is dedicated to making a difference

The Punjab model of agitations in history — from Vancouver to home