Nearly 15 years into its record as a publicly traded company, MercadoLibre (NASDAQ:MELI) continues to reward long-term investors. Shares of “Latin America’s Amazon” are up 160% in the last year alone, and now trade 8,900% higher than its 2007 IPO price of $18 per share.

Still, there are reasons to believe caution is warranted. MercadoLibre shares are expensive by traditional valuation metrics on account of its explosive stock appreciation, and the company now trades at 25 times sales. At the same time, it is expected the company’s top-line growth will slow from nearly 70% in 2020 to slightly under 40% for 2021 as the hopefully soon-to-be post-pandemic world transitions back to traditional brick-and-mortar retail. Oh, did I forget to mention the company now faces increased competition from Amazon?

Despite all these headwinds, MercadoLibre remains a buy. Here’s why. 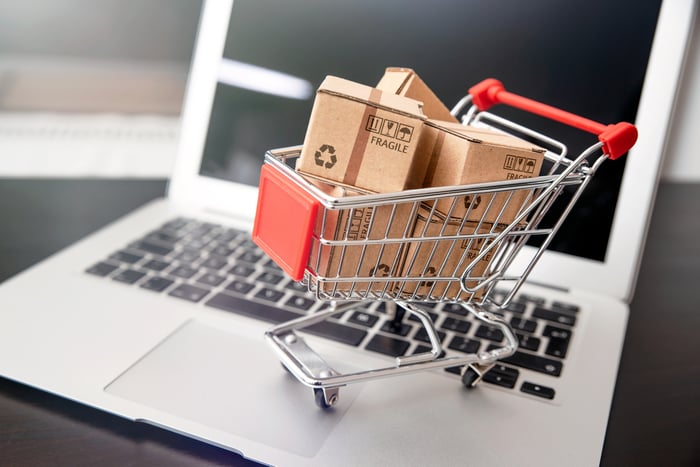 Investors often misunderstand competition, and it’s no different with MercadoLibre. Share prices dropped in November on reports that Amazon is looking to compete more forcefully on its home turf. In a press release, Amazon announced it has increased the number of logistics centers in Brazil, noting the country has the fastest growth of Prime subscriptions. This understandably unnerved some MercadoLibre investors, as nearly half of its revenue is from the country.

However, competition is often a sign of a healthy and high-growth market, and Amazon’s focus is merely an affirmation that MercadoLibre is well-situated for future success. Although Amazon is a formidable competitor, e-commerce will not be a winner-take-all market. Investors can merely look to the United States to see significant growth from retailers like Walmart and Target that have had success after investing in the digital channel, to pure-play e-commerce platform stocks like Shopify.

Additionally, despite Amazon’s record for disruption in its home market, the company has been noticeably less dominant in international markets like China and India. Also overlooked by investors is the fact that Amazon has been in Brazil for years, and MercadoLibre has continued its torrid growth streak. Amazon’s a formidable foe, but MercadoLibre investors should view this as a positive.

Surprisingly, it isn’t e-commerce that gets most in-the-know investors excited about MercadoLibre’s future. That’s not because this segment is doing poorly — in the third quarter, unique active users grew 92% and gross merchandise volume (GMV) grew 117% (constant currency) — but rather its MercadoPago payment platform. Initially, the host of digital payments solutions was initially designed to support transactions on the MercadoLibre site, but it has since expanded to an off-platform payment platform and even into an asset management provider.

In the same quarter, MercadoPago saw its number of unique payers reach 60 million, with more than half using it for off-platform uses like buying goods at a local grocery store or gas station. Total payment volume (currency-neutral) exploded by 161% over the prior year’s quarter, with volume for off-platform leading the way with 197% growth.

MercadoLibre has a long runway for growth. First, look for the company to continue to grow e-commerce users and GMVs as more markets across Latin America come online and discover the convenience. Additionally, the MercadoPago payments platform will continue to grow on-platform to support the growth in transactions, and off-line as MercadoLibre’s digital payments solution is the best way for the significant number of Latin Americans that are unbanked or underbanked to pay merchants.

MercadoLibre stock might be expensive by traditional metrics after its tremendous past-decade run, but with a market cap of only $80 billion, the company still has plenty of opportunities to continue to reward investors.

My Christmas wish? Nobody comments on my body | Maeve Higgins

The best Black Friday tech deals that are already available