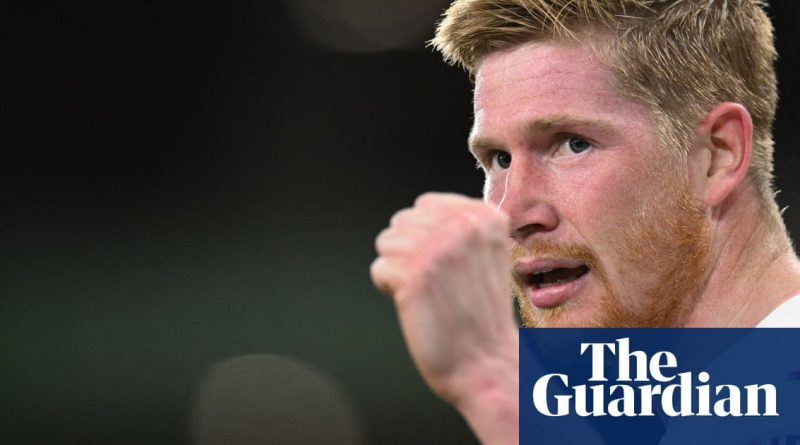 Welcome aboard: now beat this. Manchester City knew they were getting a purring, relentless, blond machine of a player who uses strength, speed and guile to breach defences in equal measure before marking the fact with a zen-like pose. They just did not realise Kevin De Bruyne would tick every single one of those boxes on the week Erling Haaland agreed to address their need up front, such as it is.

The Belgium international replicated his new colleague’s trademark celebration after burying his third goal and if it was an act of kinship then it was also a reminder that, for all the understandable excitement around their new toy, City want for virtually nothing when De Bruyne is fully plugged in.

As De Bruyne stood with arms outstretched and fingers pursed, Phil Foden dashed across the Molineux turf to join in. Foden shook his head, a wry chuckle splashed across his face, and it did not take a professional lip-reader to interpret the comment he directed to someone out of shot.

“What is this guy like, eh?” was the gist. It was a reaction matched by those who were merely spectating from the sidelines: disbelief on the one hand; on the other, awareness that nobody should put such feats beyond a footballer who continues raising the bar six weeks before his 31st birthday.

The received wisdom is that a perfect hat-trick takes in left foot, right foot and header. Left foot, left foot and left foot fitted that description well enough in the case of De Bruyne’s first three. There was something for everyone: a precise, angled finish across José Sá for the first; an opportunistic capitalisation on the Wolves keeper’s uncertainty for the second; the third rasped into the far corner from range after a surge between two defenders.

It is well documented that De Bruyne’s left side is his weaker one, although everything is relative. The story goes that, as a child, he caused so much damage to the garden of a friend’s family when cracking balls here and there with his right foot that he was only allowed to play if he promised to stick to his left. Wolves were left to curse the family’s horticultural pride but they were hardly the first.

In the summer De Bruyne scored a similar effort to the last of his strikes here for Belgium, helping them past Denmark. His version of average is most people’s interpretation of the spectacular.

“It’s just [a case of] whenever you get the opportunity, don’t hesitate,” De Bruyne said when questioned, beside the Molineux pitch, about his excellence with that less celebrated limb. “I’m never afraid to shoot with the left; even if it doesn’t go in, it creates a problem for the opposition. If you miss you miss, it doesn’t matter, you make mistakes in the game and you go again.”

The point about causing problems was fair. When, towards the end of the game, a left-foot strike went slightly off beam it still rapped Sá’s upright. “It should have been five, to be honest,” the errant shooter lamented.

His willingness to have a crack only told part of the story. Perhaps more instructive was the fact that two of De Bruyne’s four goals came after he had attempted to set somebody else up. Number two stemmed from a perceptive pass on the turn towards Raheem Sterling, who could not quite connect but was present enough to draw a convenient ricochet off Sá.

A right-footed fourth came after he had fed Foden, whose cross towards a poised Sterling was deflected into his path by Rayan Aït-Nouri. “I have the feeling he is enjoying scoring goals, not just making assists,” Pep Guardiola said, and there was something delightful about the fact De Bruyne had been able to capitalise on his own generosity.

Selfless yet ruthless: it is a devastating combination and should have yielded at least one assist, Foden hitting the post in the second half after De Bruyne had played him in. Two minutes into the game De Bruyne had swung a delicious, teasing cross inches beyond a sliding Foden. It was an early signal that he was operating close to the point of maximum expression, but hardly even counts as an appetiser.

Was this the complete individual performance? It was pretty close, and in one sense capped when De Bruyne was booked in the last quarter-hour for a cynical check on Aït-Nouri.

He had committed a similar, unpunished tactical foul on Chiquinho during the first half. Even in producing one of the season’s most memorable displays he had paid heed to the darker arts that play their own smaller, if less important, role in City’s success.

De Bruyne’s stock in trade, though, is the sublime. “I didn’t even know,” he claimed of the fact he just happened to have mimicked Haaland’s yogic celebration.

“I just did it because I’d scored three.” He is famously as unassuming as they come, but anyone would forgive him a meditation on his own excellence.

We will be in touch to remind you to contribute. Look out for a message in your inbox in . If you have any questions about contributing, please contact us.

Sleep hygiene: 8 ways to train your brain for better sleep

10 Of The Best Valentine’s Day Gifts For Self-Love