While running on the Peloton Tread, I couldn’t help but think about how Peloton the company was spiraling out of control. Under my feet was this sleek, well-built treadmill. In front of me was a slick screen where a peppy instructor was encouraging me to dig deep to push it a little further. But even as I cranked up the speed, I couldn’t reconcile this excellent treadmill with the corporate disaster unfolding in my news feed.

I’ve run on a lot of treadmills, but most don’t get as much coverage as the $2,495 Peloton Tread. Do you know when the treadmill at your local gym launched? Or even what brand it is? I don’t. And yet I know the Tread was supposed to launch in February 2021, got pushed back to May, and then got recalled alongside the more expensive Tread Plus before officially launching. The Tread’s main sin was a wobbly screen, but it was a PR nightmare thanks to the shadow cast by the Tread Plus, which injured several people and killed a child. The Tread finally launched at the tail end of last summer — and then Peloton proceeded to implode. 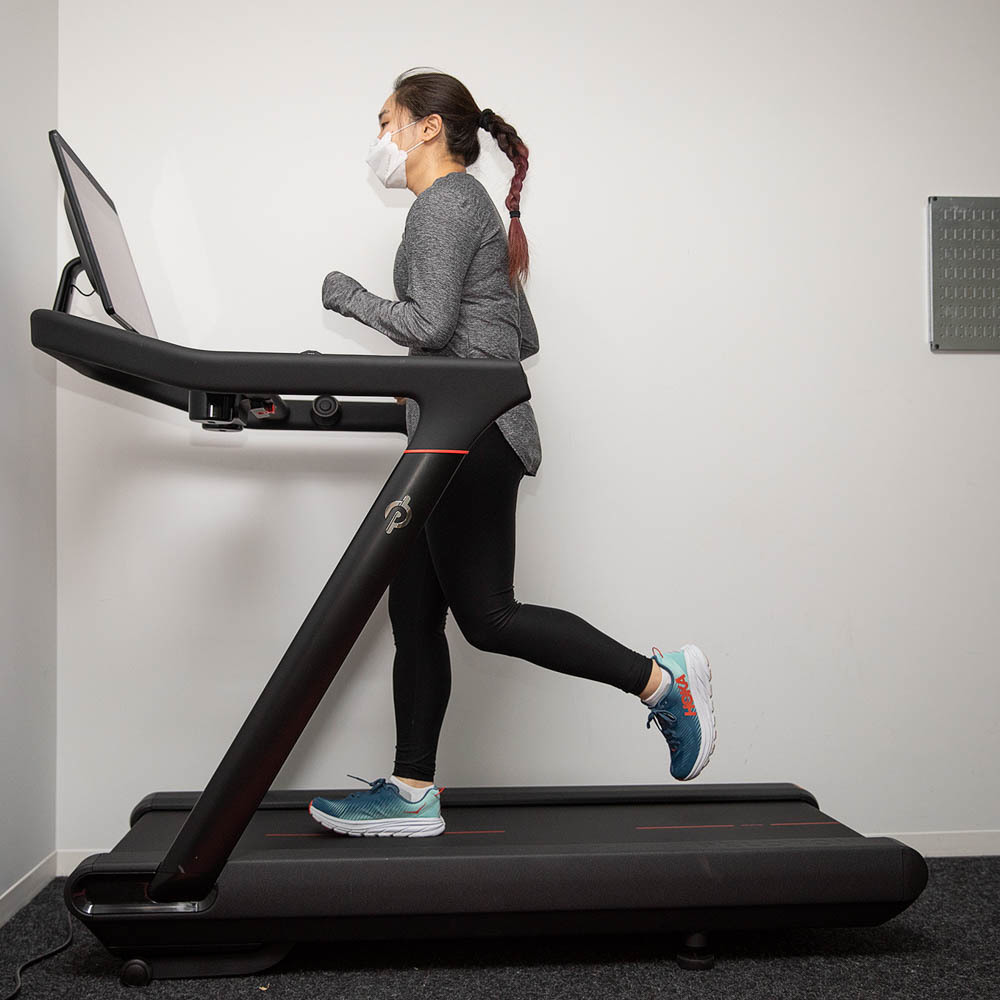 Part of my incredulity is that the Tread is a smart, well-made product. It takes the best parts of the Tread Plus and repackages it in a smaller, sleeker, and safer package. It keeps the roller knobs for controlling speed and incline, one of the best features on the Tread Plus and something I haven’t seen on many other treadmills. It’s way more intuitive to roll back a wheel after a hard sprint than repeatedly pressing a minus button on a rocker, hoping you don’t fall flat on your face before you hit a more comfortable speed. There are also buttons in the center of each knob that let you jump up to the next whole unit (i.e., a 1.0 to 2.0 incline, or 5.4mph to 6.0mph).

Unlike the hulking, floor-shaking, 455-pound Tread Plus, the 290-pound Tread isn’t louder than most treadmills, and its footprint is smaller than most couches. It measures 68 inches long and 33 inches wide — smaller than the Ikea sectional in my apartment’s living room. Most people should be able to find room to fit this in their homes.

The keyword: most. This is still a full-on treadmill. It’s slimmer than many others, but it’s not the kind you can fold up and store in a closet when you’re done. Even though it has wheels, the Tread is something you permanently commit to parking in one place. I could fit the Tread in my home, but only if I completely rearranged my living room. My husband’s patience for at-home fitness machines lingering in our cramped apartment has run out, so I opted to test the Tread in The Verge’s office. Safety was another factor in my decision. Peloton recommends 6.5 feet of clearance behind the machine in case you ever trip and go flying. No matter where I stuck the machine in my home, I wouldn’t get that. I’ve seen treadmill accidents happen. Trust me, it’s a bad time when you’re going at higher speeds, and the Tread can go up to 12.5mph.

Speaking of safety, it’s clear Peloton was rattled by the recalls. Peloton instructors will now remind you during every class to never let pets or children near the machine and to always remove the physical safety key after you’re done. When the safety key is removed during a class, the Tread’s Stop button and scroll wheels will flash red to indicate the machine is locked. The US Consumer Product Safety Commission also required that Peloton add a Tread Lock screen. This requires you to input a four-digit passcode to unlock the Tread’s belt. It pops up whenever the Tread wakes from sleep, restarts, or if you’ve been inactive outside of a class for 45 seconds. The latter can get annoying when you’re browsing classes, but it’s a minor inconvenience I’m happy to deal with. Altogether, it’s like two-factor authentication for your Tread. Maybe a fingerprint scanner next time?

Otherwise, the Tread itself is sturdy. It’s not as bulky as some treadmills you’ll find, but the carbon steel frame never gave me any trouble. Granted, I’m a petite person, so I can’t speak for how the Tread suits taller or larger bodies. It’s rated for people ranging from 4’11 to 6’4 and weighing 105–300 lbs. That’s a wide range for a treadmill this size, but I suspect some people might have to watch out for the tray when swinging their arms or when prompted to do high knees during warmups.

Other design changes from the Tread Plus include a 59-inch traditional belt instead of a slatted one and a lower platform. I liked the Tread Plus’ slatted belt when I tested it, but I didn’t miss it much here. What I appreciated more was the red line in the center of the belt. It helped me visualize where my feet were falling and made it easier to correct my form when I was tired. The only thing I didn’t love was the THUNK the belt’s seam makes when running at higher speeds (e.g., 7.0mph and higher). As for the lower platform, it’s simply easier to get onto the Tread — great if you have a killer case of DOMS from leg day or limited mobility.

While measurably smaller, in practice, the Tread’s 24-inch screen didn’t feel like a downgrade from the Plus’ 32-inch display. What can I say — classes look nice on it. It doesn’t rotate like the Bike Plus’ screen, but you can tilt it up and down 50-degrees for better viewing when doing floor exercises. The soundbar is good enough you don’t have to use Bluetooth earbuds if you don’t want to.

While the hardware is excellent, it’s not the main reason for buying the Tread — it’s the classes. Since I last tested the Tread Plus in 2019, Peloton’s greatly expanded the treadmill library. Most of the classes center around running and walking, though you can also dabble in strength, yoga, and meditation as well. You can also take Bootcamp workouts that I personally believe were invented by Satan in Peloton’s basement. Those classes feature hard bursts of running interspersed with HIIT and strength training. You will sweat and curse yourself before, during, and after. For those with a specific goal, Peloton also offers curated programs like beginner strength training or running your first 5K.

While the hardware is excellent, it’s not the main reason for buying the Tread — it’s the classes

Peloton’s also improved its overall interface, adding features to help you stay hooked. That includes adding hashtags to your workouts to find like-minded users and high-fiving the people in your classes. I was initially bewildered when a stranger high-fived me, but it was oddly motivating when I felt like giving up during a nasty hill interval. Peloton has also added scenic run and the ability to “stack” workouts so they play one after another. If you’ve got a Bluetooth heart rate monitor, you can access a “strive score” that visualizes the effort you put in. Peloton also sent me its new $90 Heart Rate Band to test alongside the Tread. I was skeptical, but it works seamlessly with the Tread and helps keep you engaged during off-treadmill workouts.

There’s a healthy mix of beginner, intermediate, and advanced classes ranging from 10 to 45 minutes. They range from hiking, hill runs, interval training, endurance runs, and HIIT. That said, they rapidly get much more difficult once you get past the beginner classes. For example, in one intermediate Bootcamp class, the instructor listed a sprint interval of 9.0mph to 12.5mph with a 1.0 incline. While the sprints were short, that’s an intense range beginners transitioning to harder classes might initially struggle with. I did fine, but I’m also someone who’s been running a minimum of 3–4 times per week for several years and has a few races under my belt.

But while the Tread is an excellent product, it’s still way more expensive than the typical treadmill. And, Peloton’s stumbling fortunes means it’s now even pricier.

During its Q2 earnings call, Peloton CFO Jill Woodworth said the company is trying to improve its hardware profit margins and that it’s doing so by adding surcharges. While Peloton previously included setup and delivery fees in the price, on January 31st, it began charging an additional $250 for those services. So while you can finance the treadmill, it’s not really $2,495. It’s $2,745, not including the $39 monthly membership. It’s unclear whether this is the new normal or just until Peloton manages to offload some of its excess inventory.

Mid-range treadmills cost between $1,000–$2,500, so you’re firmly in luxury territory here — but without some of the perks you might expect. Peloton’s very invested in building out an ecosystem, so you’re not going to find Netflix or other streaming apps on its TV-size screen unless you jailbreak it and void your warranty. It seems almost like a waste of the tablet. The Just Run mode, which lets you use the treadmill without any classes, is OK but mind-numbingly boring. The included tray also isn’t really big enough to stick a tablet on it for alternative programming. If you’re planning on multiple people using this, y’all better be ready to pledge allegiance to Peloton. If someone in your family isn’t into Peloton, this treadmill doesn’t offer them many alternatives, and the tray is too small for a tablet.

This is another reason why Peloton’s health as a company matters. You only need to look as far as what happened to Flywheel. Once Flywheel folded, people who owned their bikes suddenly found their expensive machines bricked and with little recourse. It’s hard to imagine this happening to Peloton in the short term. It’s currently embarking on a severe cost-restructuring plan, and investors are way too invested in Peloton “succeeding” via a sale. However, the Tread very well could end up as a glorified coat rack if things go awry. The Peloton fanbase is incredibly loyal, and connected fitness is here to stay — so there’s a good chance it’ll all work out. It’s just not guaranteed.

This is why I’m only comfortable recommending the Tread if you’re on Team Peloton all the way. It’s an excellent machine, but it’s custom-built for Peloton and Peloton only. There’s nothing wrong with splurging if that’s you! Go for it — you’ll be happy. But for everyone else, ask yourself if a cheaper treadmill and a fitness app subscription won’t also fulfill your needs.