“Dancing mania” hit the city of Strasbourg in 1518, and some people danced until they died of exhaustion. Numerous children in East Africa were afflicted with a “laughter epidemic” in 1962. Fourteen schools were closed. The 1980s saw an epidemic of teenage anorexia. Social contagions are a historical phenomenon, and crazes a sociological category.

Irreversible Damage: The Transgender Craze Seducing Our Daughters is a journalist’s inquiry into the how and why of the surge in self-reported gender dysphoria among teen girls. Abigail Shrier, who writes for The Wall Street Journal, examines the cultural context in which girls navigate adolescence, and in so doing uncovers a deeply troubling ideology deceiving a generation. 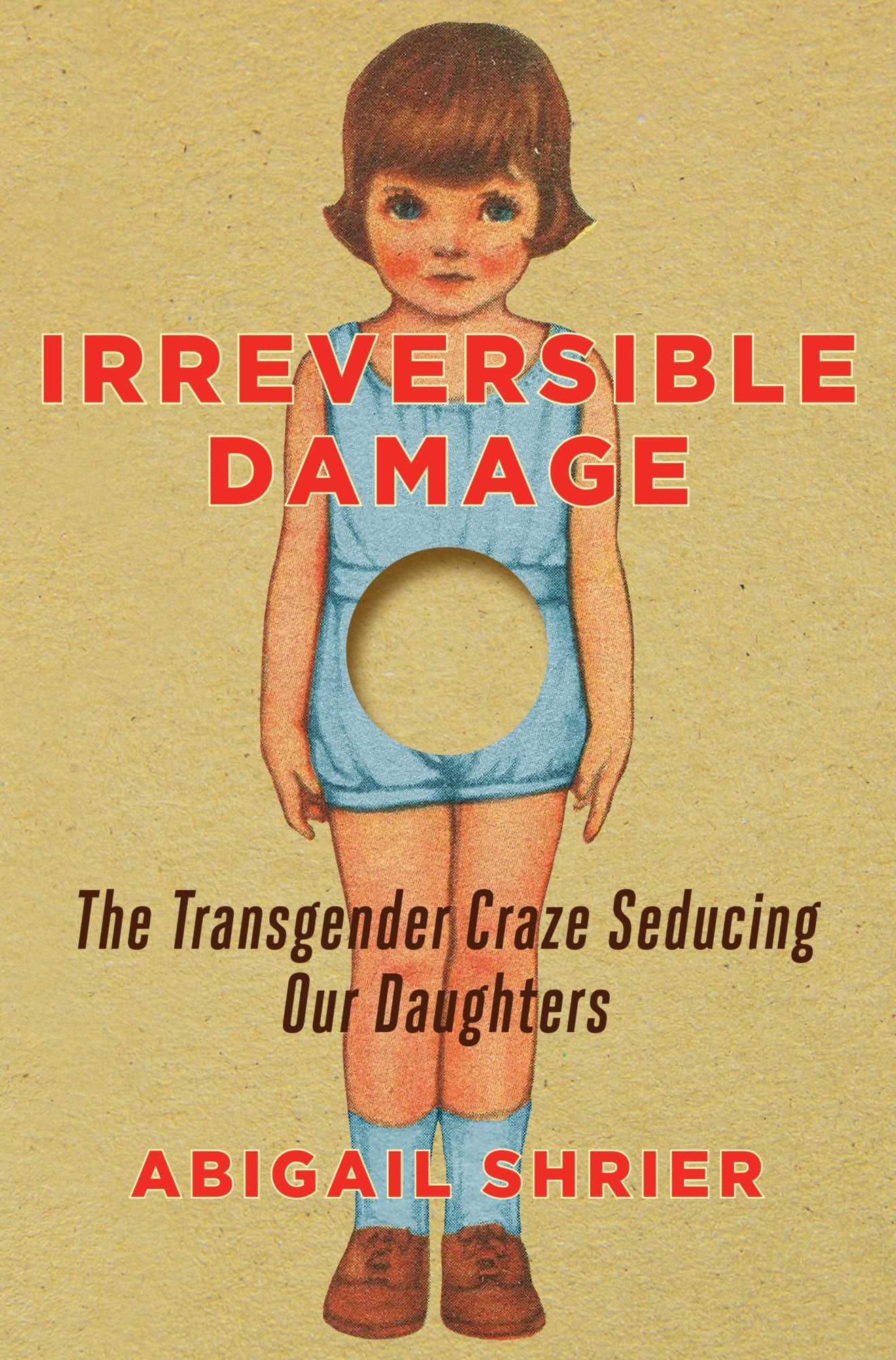 Until just a few years ago, gender dysphoria—severe discomfort in one’s biological sex—was vanishingly rare. It was typically found in less than .01 percent of the population, emerged in early childhood, and afflicted males almost exclusively. But today whole groups of female friends in colleges, high schools, and even middle schools across the country are coming out as “transgender.” These are girls who had never experienced any discomfort in their biological sex until they heard a coming-out story from a speaker at a school assembly or discovered the internet community of trans “influencers.” Unsuspecting parents are awakening to find their daughters in thrall to hip trans YouTube stars and “gender-affirming” educators and therapists who push life-changing interventions on young girls—including medically unnecessary double mastectomies and puberty blockers that can cause permanent infertility.

Most teens struggle with insecurity and awkwardness. But today, many are encouraged to interpret those natural feelings as symptoms of gender dysphoria. In addition, much of sex education is “raunchy, explicit, and radical” (68), encouraging early sexualization. Pornography, in which women are degraded and humiliated, is seen by ever younger children (153–54). Girls entering puberty understandably experience anxiety. If they don’t measure up to the Barbie image, they may consider themselves set to fail as women (196). They may rightly be repelled by that image anyway.

Social media perpetually exposes girls to the gazes of others. Their popularity (or lack of it), marked by numbers of likes, is brutally revealed, intensifying their feelings of something being wrong with them. After speaking to some of these girls, Shrier observes: “They flee womanhood like a house on fire, their minds fixed on escape, not on any particular destination” (7). A common response is: “I don’t know exactly that I want to be a guy. I just know I don’t want to be a girl” (8).

As Shrier’s analysis shows, the post-feminist world isn’t less sexist than what came before it; it’s merely more subtle. If girls don’t relish the cultural expectations of hyper-sexualized womanhood, they may be encouraged to think they aren’t really women at all. This new oppression is stoked up by activist educators, politically biased psychotherapists, and intimidated physicians.

Then add in the influencers: those who’ve achieved celebrity status by means of gender transition. They dangle the prospect of popularity and fame before vulnerable teens. All of this adds up to a generation of young women being shaped—by ideology and technology—to deal with their emotions by trying to escape their bodies.

Shrier took time to interview people in each of these categories: teachers, physicians, trans-affirming psychotherapists, and influencers. She found “gender affirmation” promoted in many American schools: “The only rule is that sexual dimorphism must be rejected outright” (67). LGBT+ sex education, smuggled into schools under the umbrella of anti-bullying (71), normalizes being gender fluid, asexual, or nonbinary (68).

One teacher explained to Shrier: “[P]arental rights ended when those children were enrolled in public school” (75). Such educators see parents as “bullies, who know next to nothing about gender theory or queer theory” (77). Religious parents are perceived with suspicion. Spiritual abuse is defined as “using spiritual beliefs to justify abuse [by] forcing others to adhere to rigid gender roles” (76).

Shrier also interviewed parents, many of them bewildered when a cherished daughter, seemingly overnight, became hostile, withdrawn, and demanded to be affirmed as a boy. Even the most progressive parents usually hesitate to see their daughter begin life-changing and irreversible treatments. Commonsense tells them something is wrong when clusters of friends come out as trans at the same time.

Parents told Shrier of their shock when schools and colleges colluded with the girls to provide affirmation and even treatments without parental involvement or consent. They were heartbroken at losing their daughters. But their girls came out with the same script, claiming that disagreement is ignorant and bigoted and dangerous. Many parents were persuaded that if they withheld affirmation, suicide would be inevitable (49–52).

Does affirmation of gender dysphoria lead to happiness? Irreversible Damage presents a sobering array of testimonies that strongly answer ‘no.’

Shrier interviewed educators who promote affirmation and those who oppose this trend, including many who lost their careers or reputations challenging the wisdom of puberty-blockers or “binding” (physically obstructing the growth of breasts). She spoke to teens who transitioned and later regretted it. One testifies that the pro-trans world she entered was a “cult,” “because when you’re inside, you believe non-reality and you disbelieve reality” (188).

It’s these testimonies of regret that offer some hope for the future. In December 2020 (after this book was published), judges in the High Court for England and Wales ruled that children younger than 16 are unlikely to be able to consent to treatment with puberty-blocking drugs.

This landmark judgment opens the way to clinical negligence claims from those who regret taking hormone treatment, which the judges found to be “experimental” and a pathway to cross-sex hormones that have lifelong, irreversible consequences. It effectively confirms Shrier’s concerns, and provides a legal precedent that can help shape policy in jurisdictions far beyond England and Wales.

Swimming Against the Tide

Parents, youth workers, pastors, and teachers would all benefit from reading Irreversible Damage. In accessible journalistic style, Shrier documents a harrowing ideological threat to the well-being of children, women, and families. She concludes her book with seven practical suggestions for parents (212–18).

In addition to urging parents to not cede their authority to activists or educators, Shrier calls for them to resist giving children unrestricted access to the internet. Christian families who want to swim against this ideological tide must think proactively about the role of technology in forming their children’s ideas and desires.

Resisting the false claims of gender ideology is an urgent matter of child protection.

Shrier’s concern will resonate with Christian readers, but she isn’t arguing from a biblical foundation, and so she doesn’t have the ultimate answer to this emerging crisis of identity. In order to understand who we are, we must understand our Creator and his design for us, as revealed both in nature and his Word.

Reading this book should compel Christians to prayer, but also to action. Resisting the false claims of gender ideology is an urgent matter of child protection. Shrier urges parents to teach girls that it’s a wonderful thing to be a woman (217–18). But, as Christians, we have confidence in both God’s general revelation in nature and his special revelation in the Word. We’re in a stronger position to resist these false claims, and to invite a confused and broken world to behold God’s beautiful design for humanity, male and female.

Rhik Samadder tries … silent disco meditation: ‘A man in socks and a bandana is romancing a tree’

The 10 best Bluey episodes, for both kids and parents – sorted